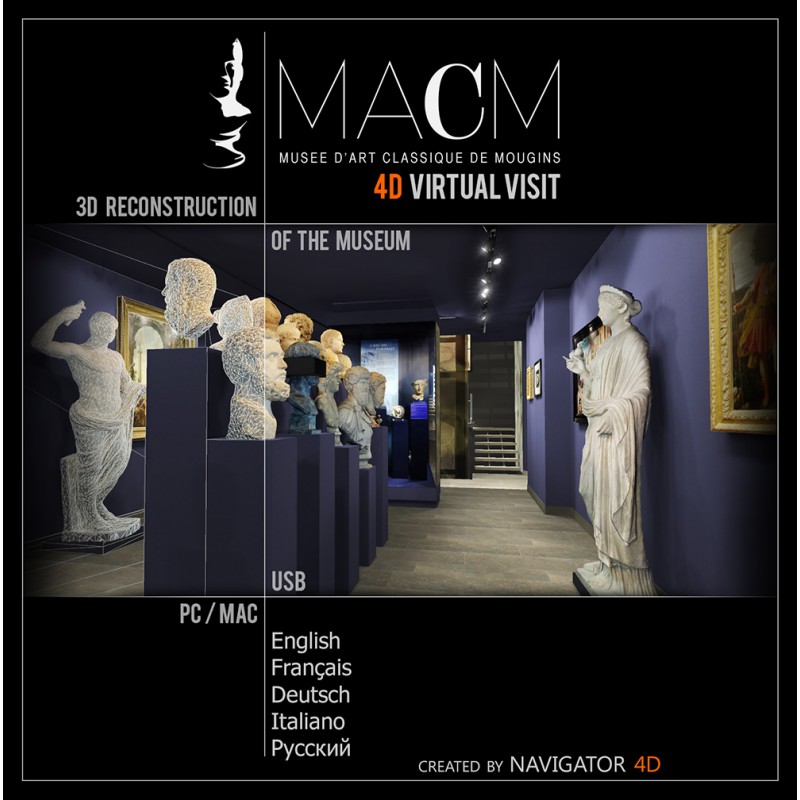 This product is an exact virtual reconstruction of the MUSÉE D'ART CLASSIQUE DE MOUGINS (MACM), an amazing museum located in the small village of Mougins, not far from Cannes, on France’s Côte d'Azur. The entire MACM building was completely recreated in 3D, including all the museum’s halls together with its display cases and exhibits. Each display case has been photographed in high quality, offering the possibility to enlarge the objects for better viewing.

The Musee d'Art Classique de Mougins (MACM) is a private museum which houses the collection of its founder, Christian Levett, a British investment manager with a passion for history and the arts. In 2008 he decided to found a museum, to enable him to share the collection with others. The MACM enjoys the rich historical background of the Cote d'Azur, and is situated in the historic region of the Mediterranean at the edge of ancient Greek civilisation and the heart of the Roman Empire. It is close to the Graeco-Roman settlements of Nice (Nikaia), Cimiez (Cemenelum) and Antibes (Antipolis). Mougins also reconnects with its ancient past through the modern art produced by its former residents including Francis Picabia, Jean Cocteau, and Man Ray, as well as Pablo Picasso

About content of MACM museum in 4D Virtual Visit product:

The Musée d'Art Classique de Mougins (MACM) enjoys the rich historical background of the Côte d’Azur, and is situated in the historic region of the Mediterranean at the edge of ancient Greek civilisation and the heart of the Roman Empire.

The subterranean gallery - known as ‘The Crypt’ because of its tomb-like characteristics - houses the Egyptian collection and has a special association with the Afterlife. Artefacts include a splendid range of tomb reliefs, funerary masks and panels, smaller gods and goddesses in bronze and wood, and culminate in two spectacular painted wood coffins.

Housed on the second floor, the Armoury contains the world’s largest private collection of Graeco-Roman arms and armour. This comprises Chalcidian, Corinthian, Illyrian and Phrygian helmets, body armour, a unique Greek lion shield, and Roman and Migration Period helmets. Soldiers lived, fought, and died in this equipment, and some of it bears the scars of battle perhaps from some of the greatest military campaigns in history. In the same space is a range of military-themed art by Giorgio de Chirico, Salvador Dalí, Man Ray and Alessandro Turch.