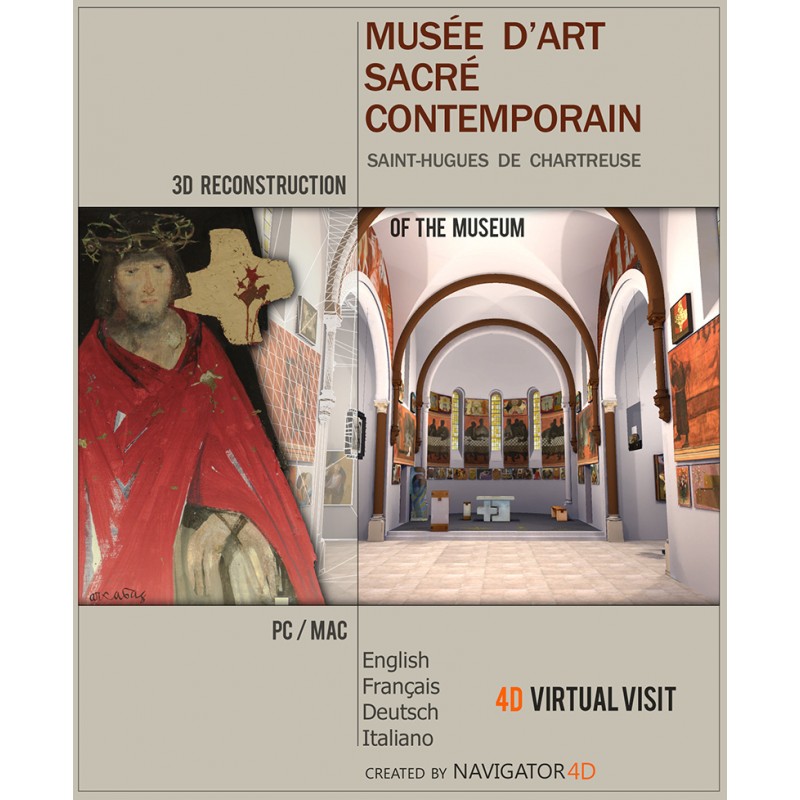 The entire museum building was completely recreated in 3D, together with its paintings and exhibits. The museum paintings are represented in high resolution images. Top quality 3D scans of the museum exhibits permit an all-round view of the piece with the possibility to zoom in to admire the smallest of details. A detailed description of each exhibit is available in several languages. Also, You can use virtual guide for exploring museum and collection in interactive animated model.

In 1951 Jean-Marie Pirot, a young artist then aged 25, suggested to Abbé Truffot and the leader of the Saint Pierre de Chartreuse local council, Mr Villard, that he might decorate the church free of charge. Arcabas took over the whole church, but the building was so damp that he could not paint directly on the walls, except for two frescoes. So to begin with he used mainly hessian cloth.

Early period. In 1952 Arcabas had the church completely emptied, uncovering its bare walls, then dressed it in white from floor to ceiling. Then he painted the transverse arches red, making them stand out like the timbers of an up-ended ship. There followed two crescent-shaped scenes, painted directly onto the wall, on either side of the transept arch. Apart from these two segments he had to give up any idea of painting any frescoes on the walls themselves, simply because they were too damp. The walls of the nave were consequently covered with hessian cloth, which is rot-proof. Arcabas worked on the project in his studio for a whole year following the preliminary work on the church. He painted 144 square metres of cloth with colours mixed with egg yolk and honey. The panels were then hung on the walls of the church or suspended from the transverse arches. Red is the dominant colour throughout

Second period. Arcabas was determined to break away from the sobriety and austerity of his early period. After a stay in Canada, during which he taught at Ottawa University, he decided to add a second frieze, using natural pigments and gold leaf for the first time. With the Coronation, Arcabas moved away from figurative painting and ventured into abstraction.

Third period. After donating his work in the church to the local council in 1984, Arcabas painted this series of 53 canvases in under a year. As soon as a piece was finished it was hung in the church, drying on the spot. The predella shows how the artist sees the world, drawing on various passages from the Bible or the  life of  Christ,  with  no  pre-defined  order.  The predella  refers  to  all the paintings featuring in the  lower  frieze.